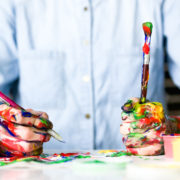 I received the following email from the Vermont Arts Council and wanted to share actions that people can take to stand up to the proposed elimination of National programs as well as take place in general advocacy campaigns at the State and National level. I used the Action Center myself and already received responses back from Welch. Super helpful tools to make taking action easy:

As anticipated, things are heating up. So, we reach out to you today and urge you to act now.

Read the article in the New York Times.

Actions you can take

1. Add your voice to the millions of Americans who want to protect the NEA. Send customizable letters to Senators Leahy and Sanders and to Representative Welch about saving the NEA. Though Vermont is blessed with supportive congressional leaders, it is important to register your concern. At the Council’s Action Center, click in the upper left box on the arrow icon next to “advocacy campaigns.” You will see a list of state and federal issues. Take action on one or more.

2. Follow some of the suggestions in this article distributed by the National Assembly of State Arts Agencies (NASAA).

3. If you were not born in Vermont, consider contacting (especially Republican leaders) in your birth or home state. (I contact Kansas leaders in honor of my deceased parents.) Because our Vermont delegation is supportive, your voice can be telegraphed to other states or districts. If you know the zip code, the Council’s Action Center can help you locate elected officials (click the search icon in the upper right box).

The House Appropriations Committee is currently considering a reduction to the Governor’s recommendation for funding the Vermont Arts Council. As you know, the Arts Council recommends precisely the opposite: investment in Vermont’s arts and culture. As far as we understand, the Committee’s deliberations are not complete, so we urge you to reach out to your representatives and senators now.

Once the House Appropriations Committee makes its budget recommendations, the process moves into the Senate. Now is a good time to begin speaking.

Actions you can take

1. Send customizable letters to your elected officials. Use the Council’s Action Center. Click in the upper left box on the arrow icon next to “advocacy campaigns.” You will be taken to a list of state and federal issues. Select “state issues” to go to a prepared letter.

2. Send a personal letter or contact your elected official by phone. The Council’s Action Center can help you locate elected officials (click the search icon in the upper right box).